How to Add Colored Smoke Bomb Effect to Your Photos

Photographs are one of the best factor to capture the memories and keep those precious moments safe for always. From the time the camera was invented and until now, we see capturing photos haven’t gone out of trend. A few years back it was not easy like today to take photos and save them safely. There were many procedures to safeguard captured photos as we have to get them printed to take a look at them.

But today we can take pictures the way we want and no matter how many, if we aren’t satisfied we can delete it and click another one. That is how much the technology has made a change within a few years. Now we not only capture pictures but also edit them according to the trend and make them professional. As we have smartphones in our hands, we can literally get all the editing and changes done quite easily to our photos without difficulties. There are plenty of options with enormous amount of effects and features available for the purpose of photo editing and among them all the best trending effect for now is the 'colored smoke bomb effect'. 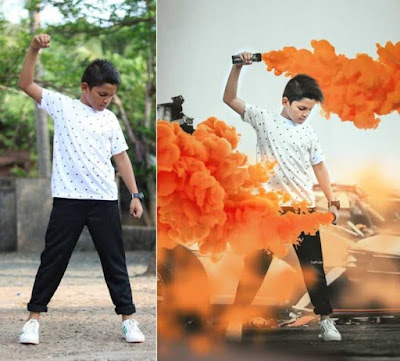 Using this effect we can add in colored smoke effects and make our picture look extraordinary. We have many apps that comes with this effect option but out of all of them I have handpicked a few apps which would provide the best service and give you a detailed and quality finish when you complete editing your pictures. There are apps that would work for both Android and iOS smartphones and also there are separate apps for each, so let us check out a few apps that has the best colored smoke bomb effect in it.
In the first place let us take a brief look at the app named 'Smoke Effect Photo Maker- Smoke Editor'. It is a user-friendly and an amazing app that can be used for both Android and iOS users. Using this app you can make your social media profile like Instagram and Facebook look colorful by adding some colored smoke bomb effects and customize them the way you want. It also comes with more than 150 unique font styles and emoji to make the colored smoke bomb effect more colorful and better. This app comes with the ability where the user can choose the photo directly from the gallery or take photos using the phone camera for editing purpose. The best part is, it has different types of color smoke bomb effects and you can fix them anywhere on the photo and customize it with the shapes, styles and sizes by zooming in and out tools.
The other app that I am going to talk about is the app named 'Smoke Effect Photo Maker' for the iOS users. You can bring out your artistic skills using this colored smoke bomb effect and create a beautiful change in your pictures. When you want to capture a picture with some colorful smoke bomb effect but the natural smoke would actually not come out the way you expect it to, so at such a moment you can use this app which would give you a better quality with an amazing outcome to make it look natural and magical. This app comes with many shapes of smoke bomb effects like mist, explosion, spiral smoke and much more. You can choose the right one to fit perfectly to your style of picture. You can adjust the transparency and the color of the smoke so that it does not overshadow. As an extra option the app also comes with many font styles and different sticker options to select from and make your photo worth it for your social media profiles.

Along with this there is also another app named 'Smoke Effect Picture Art' for Android, which also provides the best colored smoke bomb effects for you pictures. It allows you to add in smoke to your photos using different shapes, sizes and colors and make it outstandingly natural. There are more than 100 effects available for you to select. Sounds amazing right? So as we saw a few apps in brief, let us now take a detailed look at the app ‘Smoke Effect Photo Maker’ and checkout how to get the app done.

You have to get the app named 'Smoke effect photo maker' directly from Google playstore to your Android smartphone or tablet.

Let us move on to know how to add some unique smoke bomb effects for your photo with variety of color selections in Android.
Firstly launch the app in your phone and select the gallery icon if you wish to edit an existing photo from your phone or click on camera icon to capture a new photo for editing. 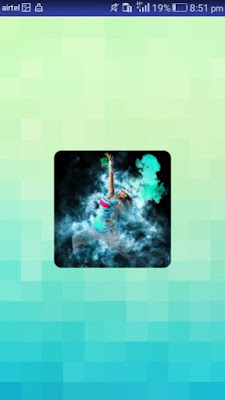 Here I have chosen an existing photo from phone for adding colored smoke bomb effect by clicking on the gallery icon. 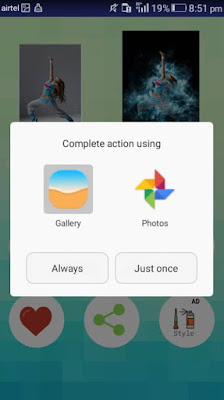 Now the selected photo will be loaded in the app and as an initial step, you have to select and crop the area which you want to continue editing. 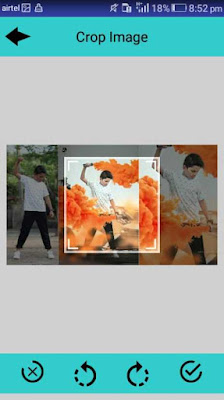 Now It’s time to add colored smoke bomb effects for your photo from the menu bar which is available at the bottom of the screen. 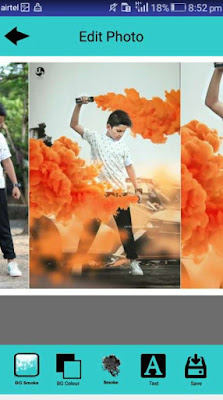 You can select 'BG smoke' tool to add coloured smoke effect to the background of your picture. Also 'BG color' tool let you to decide the color of the background. 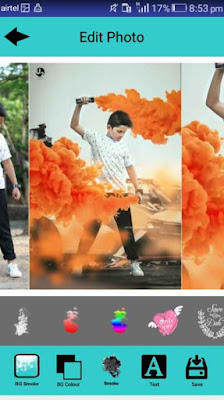 Other than colored smoke effect for photos, you can add any text to the photo along with font and color selection by clicking on 'Text' tool. 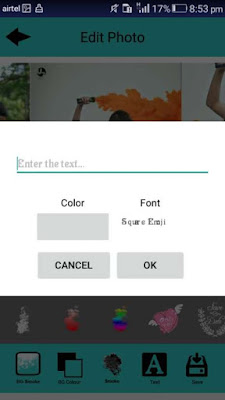 Once you finish the editing process, click on ‘Save’ button to save the final output in your phone storage.

That’s it, these are the basic method of adding colored smoke bomb effect for any photo in Android. So you can download 'Smoke effect photo maker' application directly from Google playstore to your Android smartphone by Clicking here.
Now getting a professional colored smoke effect on your photo is very simple and easy. Capture the real world element of smoke in a natural and quality way with no complications. You can create a most unique trend and get them going with a cinematic effect and bring the ordinary pictures into a magical life.